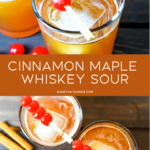 When you want to try a great tasting whiskey sour with a twist give this Cinnamon Maple Whiskey Sour a try. Perfect to enjoy during the holidays.

It’s coming to the time of year where I think we all need a good cocktail to relax and reflect on all that we’ve accomplished and what the new year may bring. But before we make plans for 2019, let’s enjoy the holiday, the food, and of course, the drinks to celebrate and toast to the year that is quickly coming to an end.

Everyone that loves whiskey sour cocktails can give credit to a book by Jerry Thomas written in 1862 called The Bartender’s Guide; although there will always be some controversy around historical creations. But today it is all about my version! My take on the whiskey sour — with a little holiday spin to it — is called the Cinnamon Maple Whiskey Sour.

During my family gatherings, everyone is up for a good game. And my go-to drink during a competitive game of Monopoly (on any day during the holiday season) is a good Whiskey Sour.

This is a fairly simple recipe and if you like a cocktail with a little sweetness added this will be a must-try. The simple syrup and maple syrup combined with the cinnamon will have you feeling like you need to be in front of a nice warm fireplace listening to good smooth music.

Even though this cocktail is sweet it does strike the perfect balance. The strength from the whiskey will set the perfect mood and there will be smiles all around.

Here are a few more holiday cocktails you might enjoy:

When you want to try a great tasting whiskey sour with a different twist give this Cinnamon Maple Whiskey Sour a try.

Run by Eric & Shanna Jones, Dude That Cookz is a food blog sharing recipes that are easy to make and pack a ton of flavor! With a few exceptions, our recipes focus on approachable homestyle and comfort-driven dishes perfect for the entire family. 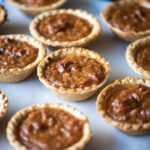