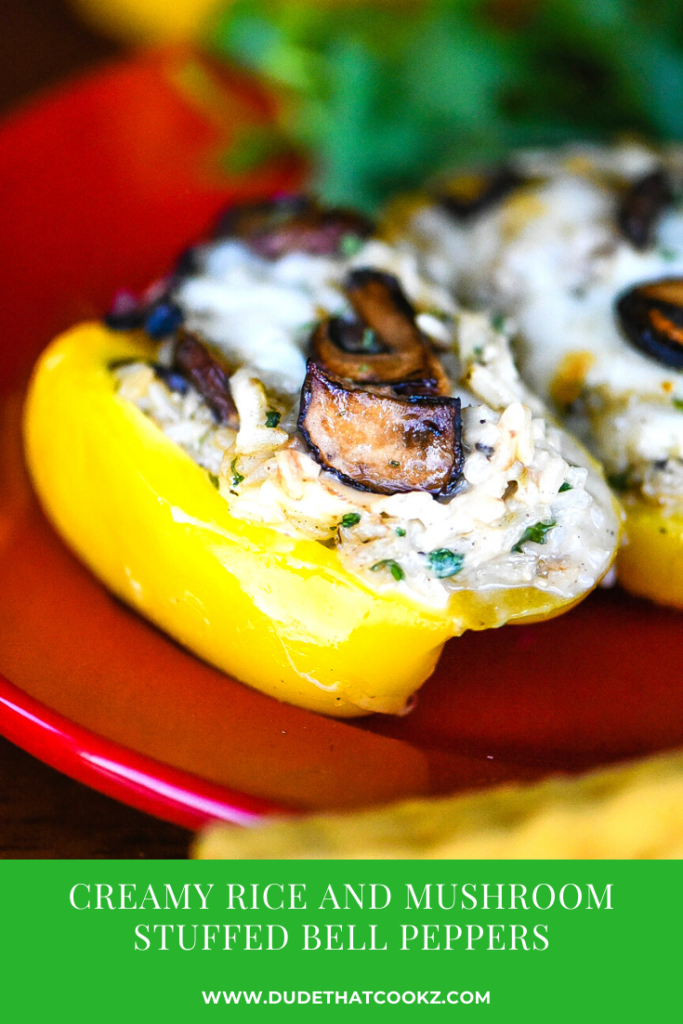 Perfect for Meatless Monday or any day of the week, my Creamy Rice and Mushroom Stuffed Bell Peppers will be right on time. It's that time of the year when most people are trying to eat healthier, but enjoying a healthy meal doesn't mean you have to give up great taste.

For this recipe, I used yellow bell peppers. They are sweet and great as the primary or base ingredient in a dish like stuffed bell peppers.

Red bell peppers also pack the most nutrients of the four and contain lycopene, which lowers the risk of various cancers. Overall, bell peppers are helpful in preventing multiple chronic diseases along with maintaining eye health.

But the health benefits of this recipe don't stop there. Let's talk about mushrooms because I love them so much! Mushrooms contain powerful antioxidants and boost your immune system. And you can't go wrong with fresh cilantro either, as it also contains antioxidants as well and aids in weight loss.

To prepare, begin by removing the stem and seeds from the bell peppers. Chop your fresh cilantro in a food processor or finely with a knife.

Cook your brown rice according to instructions and set it to the side when done. Saute your mushrooms for 5 to 10 minutes.

Add all ingredients into a large bowl and mix well.

Once you stuff your bell pepper halves with the mushroom and rice mixture, bake for 35 minutes at 375 degrees.

I can't express my love for bell peppers and mushrooms enough so I will always be slightly biased towards them, but I'll admit that this is a fantastic dish. When you want to go meatless, love stuffed bell peppers, or if creamy rice is calling your name, then give this Creamy Mushroom Stuffed Pepper recipe a try and you will not regret it. Enjoy!

These Creamy Rice and Mushroom Stuffed Bell Peppers are perfect for any day of the week. Yellow bell peppers stuffed with creamy rice and savory mushrooms and are meatless and an easy appetizer or dinner idea.

Eric and Shanna Jones are the husband and wife team behind Dude That Cookz. While both share their creative space when recipe developing, they work independently honing their individual passions including cooking and photography.

Learn more about the team →