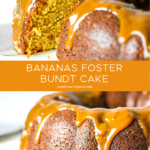 The Bananas Foster Bundt Cake (topped with a heavy-handed drizzle of rum sauce) doesn’t have an overbearing banana taste but you definitely know it’s there!

I’m from an area of Louisiana where the dessert options are always on-point! And I thought when I moved from Louisiana to Texas I would miss out on some of the dishes I grew up enjoying…until I went to a local steakhouse that served a fantastic Bananas Foster Cake on the menu.

I had to come up with my own take on this great dessert and the idea of a Bananas Foster Bundt Cake came to mind. Bananas Foster is a traditional New Orleans dessert created in the early 1950s by chef Paul Blange. Since New Orleans was a major port for bananas shipped from Central and South America, he had the timely challenge of creating a dessert using bananas.

Traditionally, Bananas Foster is served in a shallow bowl of vanilla ice cream topped with flambéd bananas and a decadent sauce made from butter, brown sugar, cinnamon, rum, and banana liqueur. To transform those flavors into a cake, I opted for the bundt style. I really love bundt cakes so I figured why not combine the two ideas into one.

The cake doesn’t have an overbearing banana taste but you definitely know it’s there. The sauce is pretty simple to make but takes some patience while getting the sugar and butter mixture to caramelize before adding the other items to prep for the drizzle. Once the banana-flavored cake is complete, it is topped with a heavy-handed pour of rum sauce. Sounds — and tastes — divine.

When you want to treat your favorite people with a great dessert, try this Bananas Foster Bundt Cake and everyone will be impressed!

Check out my Ooey Gooey Pineapple Butter Cake as well! You will love it!

When you want to treat your favorite people with a great dessert, try this Bananas Foster Bundt Cake and everyone will be impressed!